skip to main | skip to sidebar

Just returned from an appointment with my oncologist. Dr. Herst says everything is AOK as far as he can tell (and he's the expert). Am recovering from a weird viral infection which started on my spring canoe trip in the form of burning blisters on my hands and feet. Hard to portage and lift packs through the muddy wilderness with that, so had to be flown out on day 5 of a 10 day trip. Hands and feet now almost fully healed.
Posted by Bob at 11:28 p.m. 3 comments:

You'll notice a new box on the right, which is my Twitter tweets. We'll see if you like it!
Posted by Bob at 5:02 p.m. 4 comments:

Matty in the Pumpkin Patch 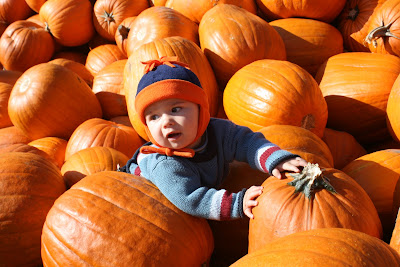 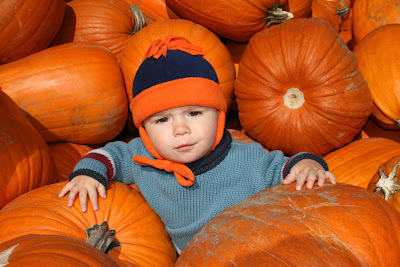 Today was a beautiful fall day. A friend signed us up to visit the pumpkin patch next week. As it turns out, the time conflicts with my riding lesson (yes, horseback! YAY!). So, we took our kids today. Matty had a great time playing in the pumpkins with his friend.
Here are a few of the pictures. 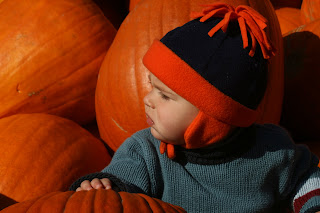 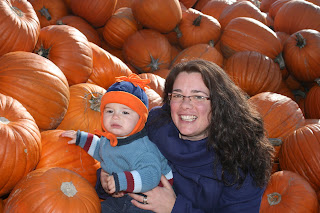 Matty is almost a year old! I can't believe how fast the year has flown by. This time last year we were still waiting to see if this house would be finished on time for us to move in. Wow. I was still working and not yet on maternity leave and friends were helping us pack up the house in Temagami.

Good thing I got over my fear of needles

Here's the short version of a long story. My immunoglobulin levels are abnormally low. This was the case prior to chemotherapy, and has continued to this day. Whether it predated cancer is unknown. My oncologist basically shrugged his shoulders and said he couldn't do anything about it, talk to my GP. My GP sent me to an immunologist in Toronto, who took some blood (all doctors are vampires, I'm discovering). The immunologist told me I have panhypogammaglobulinemia. Am I ever glad I took a medical terminology course as part of my paramedic diploma. That 24-letter monstrosity means that all of my gammaglobulin levels are low. That immunologist said I would need a therapy called intravenous immunoglobulins, or IVIG. He sent me to another immunologist who apparently provides this treatment. Of course, no doctor is content to believe the blood test results from previous doctors, so this doctor/vampire ordered new blood tests. These tests will not only gauge my current immunoglobulin status, but also the effectiveness of previous vaccines I've received.

One thing I did have confirmed is a statistical link between NHL, celiac disease (I may or may not be celiac, but I do have a gluten sensitivity), and low gamma globulins.

So that's where we're at right now. Going home tonight, finally.
Posted by Bob at 11:54 a.m. No comments:

Finally, after over 2 weeks on the road, we're home again. First to Maine to visit with Hilary, Peter, Ben and PD. Then to Vermont to visit with a whole pile of Anna's friends. Then New Hampshire. Then St. Catharines to see Sarah Laughton and Sophie, her 2 month old daughter. Then Toronto, and now home again. But we won't rest for long. We're headed back to Toronto for my first IVIG appointment at St. Michael's Hospital. (Don't think I've blogged about this before, but will soon. In short, my body currently produces insufficient quantities of immunoglobulins, so I will soon begin a lifelong supplementation program. Should make me less susceptible to bacterial illnesses and maybe H1N1!) We're staying in S. Ont. for the weekend to visit Mom and Dad. Matty's looking forward to a swim in the pool. Then another appointment in Toronto on Tuesday, and we'll be home again. Then I think we're glueing our asses to North Bay for awhile!
Posted by Bob at 10:09 a.m. No comments:

I'm glad I don't remember teething. Last Friday Matty spiked a fever, which we sorta controlled with baby acetaminophen. Then it was two full days in the car as we drove first from Temagami (er, Freudian slip) North Bay to Toronto to Rochester, and next to Portland to visit Hilary, Peter and family. Matty wasn't happy with car seat torture, and the 30+ degree weather didn't help. Yesterday he was inconsolable, not eating, not sleeping. But last night something changed, and he slept for 13 hours, with only one minor interruption. Yesterday Anna and I felt like lumps of parental-goo. Today we feel wonderful. Now off to enjoy a lovely Maine day!
Posted by Bob at 11:26 a.m. 2 comments:

How you can help

In 2009, 3530 cyclists raised $14.5 million in the Ride to Conquer Cancer. My final tally... $8310! Funds raised support cancer teaching, research and care at the Campbell Family Institute of the Princess Margaret, one of the top 5 cancer research centres in the world.
I want to thank everyone who made this happen. You are my heroes.
I will be riding in the 2010 RTCC. Fundraising will take a different path this year, but if you wish to make an easy online donation, please click here!

Fishermen
by a rocky shore,
winds blowing wildly,
in a boat unmoored -
such is our condition
SAIGYO (1118-1190)

We love comments! If you have had trouble leaving a comment, it's probably because you don't have a gmail account. Just make sure you post as 'other' or 'anonymous'.
Thanks!